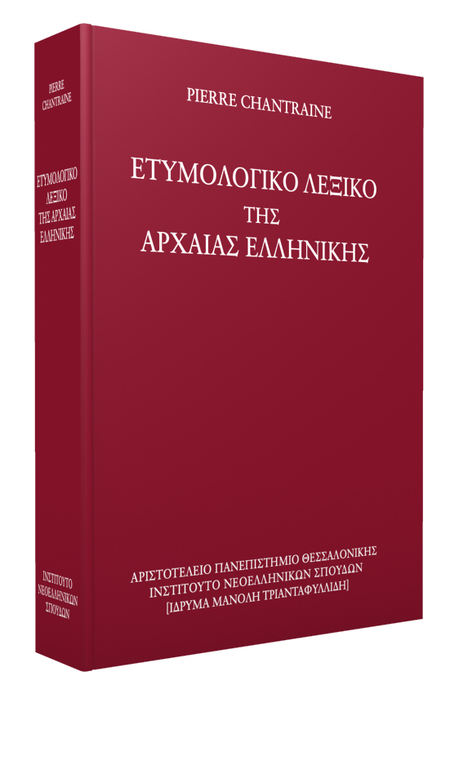 Strange as it may sound, so far Greek readers who wished to approach in a scientific and comprehensive way the provenance of the Greek lexicon would find out, to their surprise, that the modern authoritative etymological dictionaries of Ancient Greek, consulted by philologists, linguists, and students the world over are written in German (Hj. Frisk, Griechisches etymologisches Wörterbuch, 1954–1972, reprinted in 1973), in French (P. Chantraine, Dictionnaire étymologique de la langue grecque: histoire des mots, 1968–1980, revised edition 2009) and in English (R. S. P. Beekes, Etymological Dictionary of Greek, 2010). The lack of a modern and internationally established etymological dictionary of Ancient Greek written in Greek motivated the Institute’s decision to translate the seminal work by Pierre Chantraine.

Given the scholarly value of all three dictionaries, this translation does not merely focus on the etymology of the words of Ancient Greek, but also deals with their history, i.e. the history of the Greek lexicon from the Mycenaean times to the end of the ancient world –and quite often to our times. This is the first reason why this particular dictionary was chosen among the three. A second reason was that, since 1996, Chantraine’s dictionary has been supplemented by a “Chronicle of Greek Etymology”, published in the reputable philological journal Revue de Philologie, where continuers of P. Chantraine’s work worth their name (A. Blanc, Ch. de Lamberterie and, until recently, J.‑L. Perpillou) compile and publish new views on the etymology of Ancient Greek words, thus constantly updating it. The Greek publication, just like the 2009 French one, respectively, includes in its Supplement the first 10 Chronicles, published from 1996 to 2005.

The Greek translation goes along with an extensive Annex, outlining in much more detail than the French original the pathways of the Ancient Greek lexicon (survivals and revivals) all the way to Modern Greek. Such an endeavour, initiated by P. Chantraine already, is now carried out more systematically and more comprehensively than it was possible in his time, as we currently have a greater number of more notable dictionaries of Modern Greek and because the etymology of Modern Greek as a discipline has come to more recent conclusions.

The task of revising the translation and the overall editing of the work was taken on by Giorgos Papanastassiou, director of the Institute and Professor of the Aristotle University of Thessaloniki (who also compiled the Annex), and Dimitris Christidis, Professor Emeritus of the Aristotle University of Thessaloniki (who in many cases adapted the references to ancient authors’ texts to recent editions). Athanasios Petrou and Giorgos Darlas shared the hard and highly demanding work of translation, which was edited by Eleni Deliali-Dapi, Sophia Tsolaki, and Irini Kriki. The Greek translation also contains an additional full list of the ancient sources (ancient writers and their works, inscriptions, papyri, ostraca, etc.) referred to in the Dictionary.