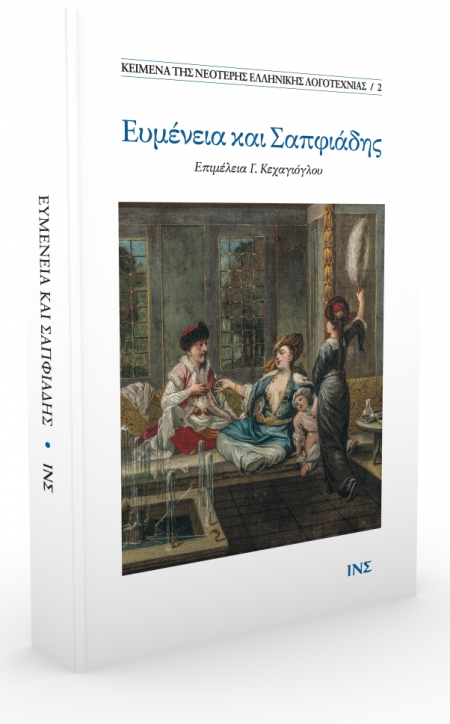 The novella Eumeneia and Sapphiades («The elegant story of Eumeneia and Sapphiades, or Spy of the wordly affairs…»), composed probably already in the 18th century and copied into its only known manuscript by its owner, the Constantinopolitan Konstantinos Rossét(-is, -os), probably before 1803, is a paradoxical and intriguing combination of both an etiological/mythical narrative about the differences and relations of the two human sexes and a delightfully enlarged reconstruction of the first part of the popular renaissance Italian prose novelette «Fairytale» («Favola») by Niccolò Machiavelli. It emerges as a mature erotic and satirical work of Phanariot literary prose, which surpasses, in many aspects, the achievements of the School of sensitive lovers by Rigas Velestinlís, the three short stories of the collection Results of Love..., the novel Love story... by Georgios Lapatis, etc.; in addition, it cleverly avoids the explicit «didacticism» of other satirical, rhymed works of the Enlightenment period (such as, for example, poems by Al. Kalfoglou, M. Perdikaris, etc.), and constitutes a forerunner in literary «social study of manners», long before the homologous but later short stories by Vilarás and Psalidas.

Edited by G. Kehayóglou, this edition is the second one of a new text series («ΚΝΕΛ» ="TMGL", that is «Texts of Modern Greek Literature») published by the Institute of Modern Greek Studies. This series continues, chronologically, the text series «ΠΚΝΛ» (= «ΟΤMGL», that is «Older Texts of Modern Greek Literature») of the Institute, and is also addressed to students, teachers and the wider readership, aiming to provide handy philological editions of literary texts written from the last quarter of the 18th c. until the end of the Interwar period (1940). Priority is given to unedited works, or to works known only from older and non-philological editions, or unaccurately published until now. Each edition of this series, appropriately illustrated, includes an Introduction, the Text of the work, a Glossary and Table of proper names, an Appendix with related texts, and a Selected Bibliography.

The editor is professor emeritus at the Aristotle University of Thessaloniki.