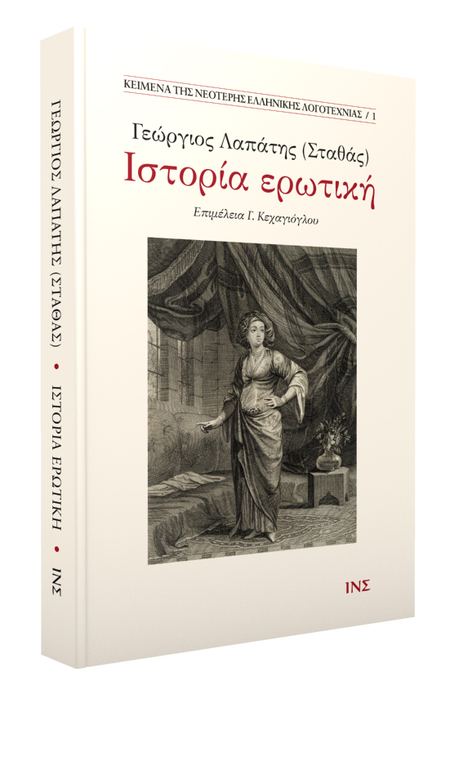 The Love story; that is an overwhelming love of a young man, from Constantinople… is the first known Modern Greek literary prose love story that goes beyond the length of a short story and reaches the limits of a novella or even a short novel. Written in 1793, most probably by Georgios/Georgakis Lapatis (Stathás), a learned “grammatikós” (secretary) of Konstantinos Ha(n)jer(l)ís, ruler of the semi-autonomous Wallachia, it was preserved acephalous, with an intermediary gap and truncated, and in a single manuscript copy dated 1806. The narrative, enriched with several (hitherto unknown) “Phanariotic” love poems-songs and with a few prose love letters, follows the tradition of the French short stories selected, translated and printed by Rigas Velestinlís under the title A School of delicate lovers… (1790), as well as the example of the first “story” of the printed collection of three short stories Results of Love… (1792); it tells the idyllic love and “happy ending” story of Georgakis and Marioritsa, two rich, modern and gifted young persons from Constantinople of the time. The book offers the first philological edition (editio princeps) of the preserved part of the work.

Edited by G. Kechagioglou, the book inaugurates the new series of the Institute of Modern Greek Studies “Texts of Modern Greek literature”, which is meant as a continuation of the series “Older texts of Modern Greek literature” and is also addressed to students, teachers, and the wider readership. This new series aims to provide handy scholarly editions of Modern Greek literature texts written from the last quarter of the 18th century until the end of the interwar period (1940). Priority is given to unpublished works, but also to works known only from older non-scholarly editions, or from modern but unsatisfactory editorial attempts. Each publication of the series, illustrated with relevant pictures, includes an Introduction, the Text of each work, a Glossary and index of proper names, and an Annex with related texts.

The editor, G. Kechagioglou, is professor emeritus at the Aristotle University of Thessaloniki.