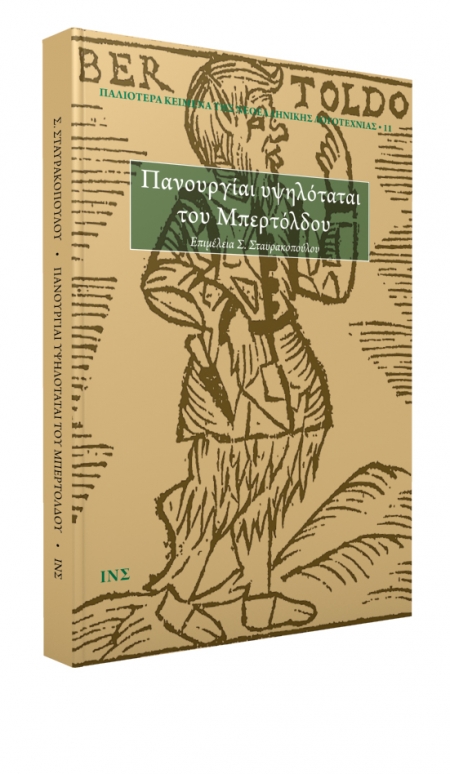 Πανουργίαι υψηλόταται του Μπερτόλδου [The very subtle tricks of Bertoldo] are the first title words in the anonymous Greek printed translation (1645) of the prose narrative-and-dialogical work Le sottilissime astutie di Bertoldo (1606) edited by the popular Italian author Giulio Cesare [dalla] Croce. The original corresponds with the ending of a Western European medieval tradition presenting an ugly and deformed peasant with pungent cunning and innate wisdom, strong self-preservation instinct, and an unquenched thirst for freedom, to be the counterpart of the wise King Solomon.

Croce modelled his manieristic Renaissance work on an anonymous Latin printed text (ca. 1470) of Jewish origin, the Dialogus Salomonis et Marcolphi, changing the names of the protagonists and transposing them to the Veronese court of the early-Medieval barbarian ruler Alboino: seeking both to amuse themselves and test Bertoldo’s cleverness, the king, his wife, who is hostile towards the hero, and various courtiers put successive questions and tests to him, which the «naive» and «uneducated» peasant outruns with courage and unconventional insolence. Critics see in Bertoldo not only a new Aesop, but also a type of jester, the kind of anti-hero common in farce, carnival, and commedia dell’arte. As in other European countries, Bertoldo has enjoyed great popularity in the Greek world as a popular chapbook or as a starting point for theatrical plays.

In the book’s Appendix its editor, S. Stavrakopoulou, associate professor at the A.U.Th., offers also an extensive anthology of similar texts from the 14th to the 20th century.