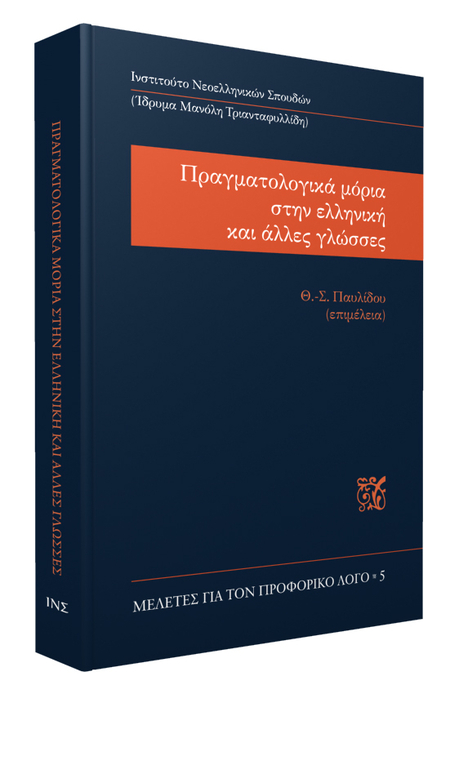 The fifth volume in the series "Studies in Spoken Greek" focuses on pragmatic particles, a topic that has been attracting increased attention as linguists turn more to the use of language and its investigation via naturally occurring spoken data. These items – characteristic of (informal) spoken discourse – have long been ignored (even devalued) by mainstream linguistics and resist categorization into a single class.

Prototypically, they exhibit some common features which, however, in practice do not prove to be equally important for all members of a prospective category ‘pragmatic particle’ (especially if accompanied by universality claims). This fact favors the division of particles into various (sub)categories and encourages partial approaches to the subject. It also partly accounts for the vast variety of names that have been used to refer to the very same or similar phenomena.

The term ‘pragmatic particles’, used here (cf. also Östman 1995, Foolen 1996, Fried & Östman 2005), seeks to bring to the fore linguistic items and constructions of an indexical and meta-communicative character, without commitment to particular demarcations and categorizations. In other words, particles are conceptualized primarily as a functional category, whose full range and differentiation from others is to be established. The aim of the present volume is precisely to work out (some of) the prerequisites for a coherent investigation of the topic, drawing primarily on spoken Greek.

The book’s editor, Th.-S. Pavlidou, is professor emerita at the Aristotle University of Thessaloniki.